GIVE TODAY
Though it doesn?t boast fancy plumage, the grayish-brown, sparrow-like Inyo California towhee is remarkable for its tenacity. 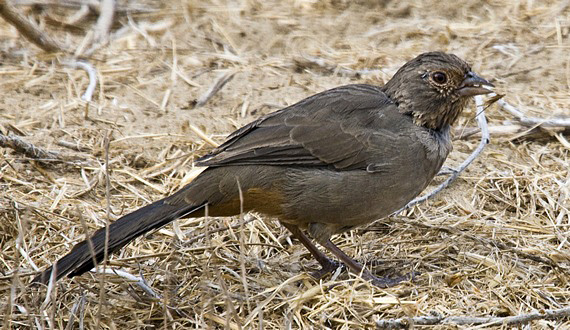 DESCRIPTION: The Inyo California towhee is a medium-sized, brown-grey songbird of approximately seven to 7.5 inches in length, with both sexes appearing similar in size and color. This bird's plumage is a slightly paler gray than that of other members of this species.

HABITAT: Inyo California towhees nest and forage in areas of dense riparian vegetation dominated by willows, Fremont cottonwood, and desert olive with associated rubber rabbit brush and squaw waterweed. They also nest in shrubs of the upland community adjacent to riparian habitat and use the upland habitat as their principal foraging grounds. This habitat consists of Mojave creosote bush scrub or Mojave mixed woody scrub.

RANGE: The Inyo California towhee is mostly found in the southern Argus Mountains in Inyo County, California, on lands administered primarily by the Bureau of Land Management and China Lake Naval Air Weapons Station, but the species has also repopulated Surprise Canyon in the nearby Panamint Range.

MIGRATION: The Inyo California towhee is not migratory, but it does make limited movements between lower and higher elevations to find food.

BREEDING: The breeding season usually starts in early spring, coinciding with local plant growth and flowering periods. Courtship and nest building begins in March, and the first clutches, consisting of two to four eggs, are generally laid in April; if the first clutches fail, a breeding pair may produce a replacement clutch as late as May or early June. Bulky, cup-like nests made mostly of twigs and grasses are incubated by the female for about 14 days. Inyo California towhees mate for life.

LIFE CYCLE: Young towhees fledge eight days after hatching and are fed by parents for at least four weeks after that. Sexual maturity is generally attained in the first breeding season after hatching.

FEEDING: Inyo California towhees are omnivorous and opportunistic, eating just about any seed or invertebrate they can find. They primarily feed in open rocky and sandy desert hillsides, but will also forage in dense riparian vegetation. Towhees usually peck and glean when foraging but will also scratch, chase, and harvest.

THREATS: Destruction of riparian habitat by grazing, mining, off-road vehicles, and water diversions are immediate threats to this bird.

POPULATION TREND: Surveys showed that the Inyo California towhee had a tiny but relatively stable population between 1978 and 1987 (at 100 to 200 birds) and between 1992 and 1995 (at about 200 birds). A comprehensive 1998 survey located 640 adult birds, and a 2004 survey of Bureau of Land Management and state lands documented 204 adults and estimated a range-wide population of 725 adults. Surveys were conducted in 2007 and 2008 as part of the five-year review for this species, and a report on its status is expected by September 2008.