GIVE TODAY
The Esmeraldas woodstar, a hummingbird endemic to Ecuador, is a mysterious, range-restricted, forest-dwelling species with highly localized populations. 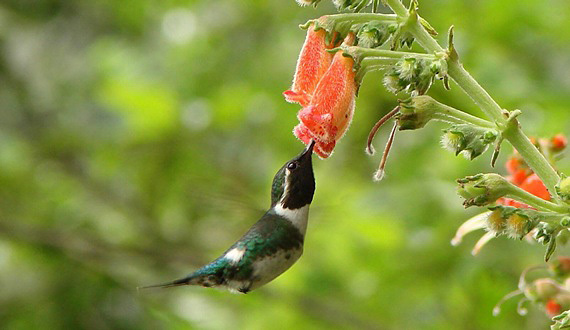 DESCRIPTION:  The Esmeraldas woodstar is a tiny hummingbird, measuring 2.5 inches in length. Both sexes have a prominent violet, green, and white plumage with a straight black bill. The male has a narrow breast-band, whereas the female has a gleaming white underbody.

HABITAT: Esmeraldas woodstar is a range-restricted, forest-dwelling species with highly localized populations.  The species' prefers primary forest and is usually found in lowland semi-evergreen forests.  The bird has occasionally been observed in secondary-growth semi-humid habitat during the breeding season.  Very little suitable woodstar habitat remains, and the species' distribution is extremely fragmented.

RANGE: Today, the Esmeraldas woodstar inhabits northwestern Ecuador in the Departments of Esmeraldas, Manabí, and Guayas, along the slopes of the Pacific Andes.  The species' historic range has been reduced by 99 percent.  The current range is estimated to be 446 square miles in three isolated areas.

MIGRATION: Due to its rarity, little is known about this species' migration habits.

BREEDING: The Esmeraldas woodstar's breeding season is between March and May.  Little else is known of the bird's breeding habits or other activities during most of the year, as it seems to disappear from known locations during non-breeding months.  Only one breeding site has been located in the Department of Guayas.  In general, male hummingbirds breed with several females in one breeding season and the females take responsibility for all other reproductive tasks. Hummingbirds typically produce two eggs per clutch.

LIFE CYCLE: Little is known about this bird's life cycle or life span.

FEEDING: The Esmeraldas woodstar forages mainly in the canopy and feeds on insects and nectar.

THREATS: The primary threat to this species is deforestation as a result of habitat alteration such as agriculture and live stock grazing. In addition, logging, road development, and pollution from industrial activities occur within or near protected areas.  The remaining habitat for the species has been reduced by 99 percent and is highly fragmented.