GIVE TODAY
When threatened, relict leopard frog tadpoles hide in the mud. 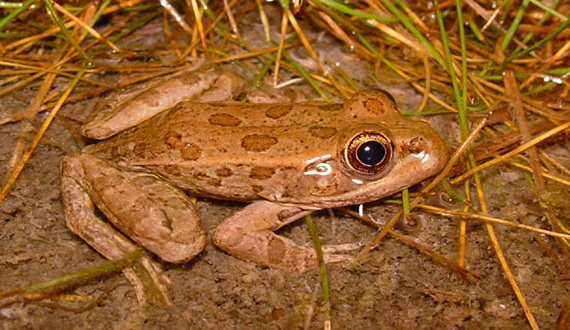 DESCRIPTION: The relict leopard frog is a small, spotted frog with an adult body length of 1.75 to 3.5 inches. The dorsal color is brown, gray, or greenish with greenish-brown spots. A glandular dorso-lateral fold with a light stripe runs down each side of the back. The underside is whitish, with dark mottling on the throat and yellow-orange in the groin area and on the underside of the hind limbs.

RANGE: The relict leopard frog historically occurred within the Virgin, Muddy, and Colorado river drainages in Utah, Nevada, and Arizona, as well as in the area around Las Vegas, Nevada. The species has likely been extirpated from Utah, Arizona, and from the Muddy River drainage in Nevada, and persists in only a tiny fraction of its known historical range. The frog is now restricted to six springs in two separate localities within the Lake Mead National Recreation Area in Nevada.

BREEDING: Relict leopard frogs breed in late January through April, with peak egg-laying activity in February and March. Favored breeding habitat seems to be quiet, shallow pools outside the channel or slow-moving side areas of streams. Spherical egg masses of up to 250 eggs are attached to the stems of living or dead vegetation just below the water surface.

LIFE CYCLE: Relict leopard frogs spend their entire lives in close proximity to springs and riparian corridors within the harsh desert environment. Hatchlings and small tadpoles inhabit the shallow edges of breeding pools, and adults can be found basking near permanent wet sites.

THREATS: Habitat changes due to dams and water development and agricultural and urban development were responsible for eliminating much of the frog's original habitat. Remaining relict leopard frog populations suffer from low genetic variation and are vulnerable to extinction due to population fragmentation and the small size and isolation of their remaining habitat. Suitable habitat is threatened by potential water development along the Muddy and Virgin rivers, alteration by invasive plants, impacts from feral burros, recreational impacts by visitors to Lake Mead, and alteration due to natural erosion and scouring. Relict leopard frogs face the additional threats of predation and competition by introduced species such as bullfrogs, exotic fish, and crayfish, and the potential for contracting diseases that have hit other leopard frog species in the region.

POPULATION TREND: It is estimated that fewer than 1,100 adult relict leopard frogs remain in the wild.