GIVE TODAY
Although the coquí frog is Puerto Rico's state animal, three coquí species are believed extinct and the rest are very rare. 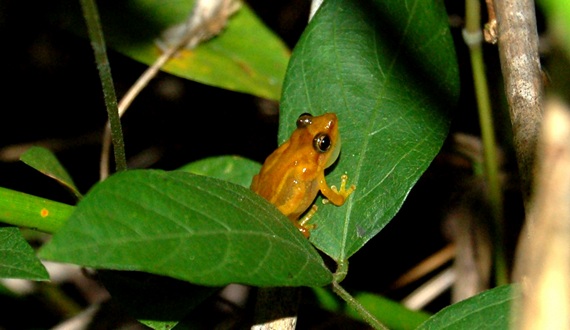 DESCRIPTION: This is the smallest of the coquí frogs of Puerto Rico, and the only wetland specialist among the 17 known species. Mature adults are only the width of a dime, ranging in color from a deep yellow to a yellow-brown, with reverse-comma markings on their sides. Males are frequently bright yellow, while females' color tends more toward light yellow-brown; young tend to be yellowish-green. The frogs have prominent nasal passages that give their snouts a squared appearance.

HABITAT: When observed in the field at night, the coquí llanero is most often found vocalizing on the leaves of the toothed midsorus fern and the Willdenow's maiden fern. During the day, it seeks refuge in the leaf axils of the bulltongue arrowhead.

MIGRATION: This frog does not migrate.

BREEDING: The coquí llanero has the lowest reproductive output of all of the coquí frogs and has only been observed to lay eggs in the leaf axils of bulltongue arrowhead plants. Egg clutches of one to five eggs are left in the pockets of these leaves, from 1.3 feet to 3.9 feet above the ground. Three weeks after the eggs are laid, miniature replicas of adult llaneros hatch. No parental behavior has been observed thus far.

LIFE CYCLE: The lifespan of this frog is not known.

FEEDING: Like other coquís, the llanero eats small insects, but the bulk of its diet consists of Acari (ticks, which are not insects but arachnids).

THREATS: The coquí llanero is threatened by water pollution, destruction of its habitat for residential and commercial use, contaminated runoff from a landfill, fluid spills from an active go-kart and racetrack facility, factors associated with climate change, and the proposed Vía Verde natural gas pipeline.

POPULATION TREND: Little is known about this frog's long-term population fluctuations. The herpetologists who discovered the llanero are worried that it may soon be wiped out, as was the coquí dorado, or golden coquí, which was discovered in 1976. (The coquí dorado was the only known live-young-bearing frog discovered in the western hemisphere; but by 1991, all sightings of the frog had ceased, and it is now feared extinct.)