GIVE TODAY
The Jollyville Plateau salamander has four toes on its front feet and five on its back feet. 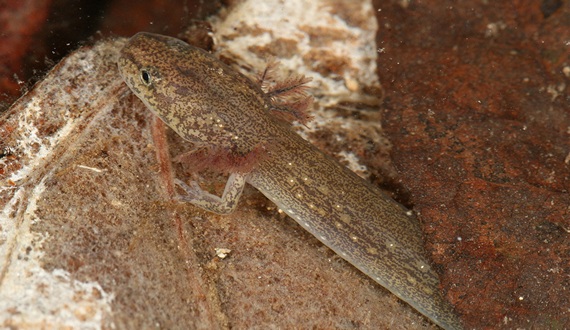 HABITAT: This salamander lives in springs, spring runs and wet caves that are fed by Texas' Edwards Aquifer.

RANGE: This salamander is found only in northwest Travis County and southwest Williamson County, Texas.

MIGRATION: Migration is unlikely for this salamander, though there may be seasonal variation in surface versus subsurface habitat use.

BREEDING: Jollyville Plateau salamander breeding events have not been observed but are known to be aquatic. Like other spring-dwelling salamanders, this species is thought to deposit eggs in gravel substrate; egg laying and early development likely occurs in the subsurface aquifer. Females full of eggs have been observed between November and February, with the highest number of juvenile salamanders occurring from March to August.

LIFE CYCLE: The longevity of this species is unknown.

FEEDING: The Jollyville Plateau salamander probably feeds mainly on small aquatic invertebrates, especially insects in their larval stage found at the bottom of a body of water, such as amphipods and midges.

THREATS: Habitat modification, in the form of degraded water quality, is the primary threat to the Jollyville Plateau salamander. The salamander is also in danger from urban development, spring-flow declines, and disturbance by humans and feral hogs.

POPULATION TREND: Because Jollyville Plateau salamanders were described only recently and most of the known populations were discovered recently, little is known about the historical abundance of this species. However, the U.S. Fish and Wildlife Service has cited “significant declines in abundance” for this species at four monitoring sites since its official discovery 10 years ago.