GIVE TODAY
Sometimes this salamander's stomach contents are visible through its translucent skin. 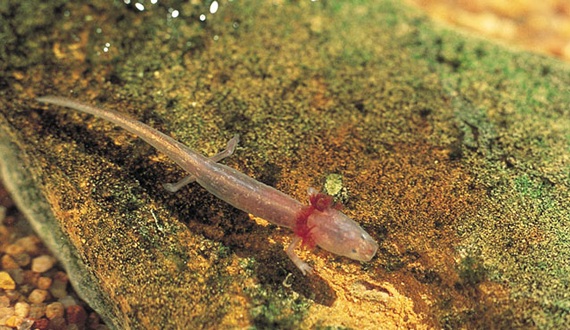 The specific name sosorum comes from the acronym used for the Austin environmental group Save Our Springs (SOS) Alliance. Eurycea has no known origin but is thought to be mythological in nature.

DESCRIPTION: The Barton Springs salamander is small, with a slender body of up to 2.5 inches in length that varies in color from pale purplish brown to yellowish cream. The salamander has a creamy, translucent appearance, a flattened snout, elongated limbs, small eyes, a relatively short tail with a yellow-orange stripe, and three pairs of bright-red external gills on its neck.

HABITAT: Barton Springs salamanders live in clean, flowing water with a consistent 70-degree temperature in depths between 0.33 and 16.4 feet. They are usually discovered around the main Barton Spring outflows, hidden within a one- to three-inch-deep zone of gravel and small rocks that is clear of fine silt and decomposed organic debris.

MIGRATION: The extent to which the Barton Springs salamander migrates locally between its four spring sites is currently under study.

BREEDING: Few details about the salamander's breeding habits are available, but females are known to carry their small, white, iridescent eggs for a year before depositing them in string-like clusters. Evidence suggests that breeding and hatching takes place all year and eggs are deposited in the Edwards Aquifer, which feeds the pools in which the salamanders live.

LIFE CYCLE: The Barton Springs salamander is permanently aquatic and neotenic, meaning that it remains in the water throughout its life and does not metamorphose into a terrestrial form.