Although martens are in the mustelid family with skunks and other powerfully musky species, the marten's odors are barely perceptible to humans. 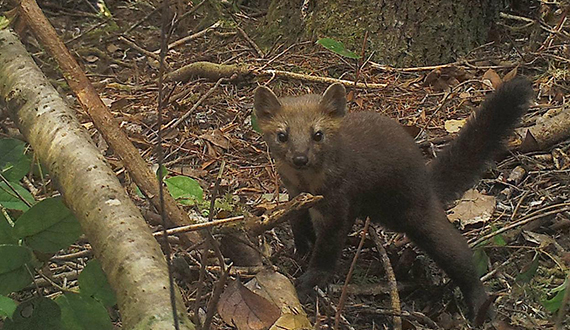 A stealthy, cat-sized forest carnivore in the weasel family, the Humboldt marten (once/also called the coastal marten) is so rare that it was thought extinct until rediscovered in 1996. Now, due to extensive logging of coastal old-growth forests in Northern California and Oregon — the only places it's found — the marten has been eliminated from 95 percent of its historic range. Other threats to the marten abound, including wildfires and loss of genetic diversity due to population separation and a tiny overall population size.

To make sure the Humboldt marten never slips out of human awareness again, in 2010 the Center for Biological Diversity and the Environmental Protection and Information Center (EPIC) filed a scientific petition to protect the species under the federal Endangered Species Act. The U.S. Fish and Wildlife Service denied protection.

After a decade of work — including more than one lawsuit by the Center and EPIC challenging the Service for failing to protect the marten — finally, in August 2020, this fierce but furry creature won protections as "threatened" under the federal Endangered Species Act.

Meanwhile, in response to a state petition by the Center and EPIC, the California Department of Fish and Wildlife has listed the marten under the California Endangered Species Act. Fewer than 200 individuals remain in California.

Saving the Humboldt marten means protecting its habitat and reestablishing population connectivity. Martens are secretive hunters that only move through dense shrub cover or areas with closed forest canopy, so extensive clearcutting has dramatically fragmented their range, isolating populations in Oregon and California. Throughout the species' range, fewer than 400 individual martens survive, in four very isolated fragments.

Luckily, following more than a decade of efforts by the Center and allies, in 2021 the Fish and Wildlife Service proposed to designate 1,413,305 acres in northwestern California and southwestern Oregon as critical habitat for Humboldt martens.