The Miami tiger beetle is now considered a distinct species even though in the 1930s, when it was first discovered, it was thought to be a variety of an existing species of beetle. 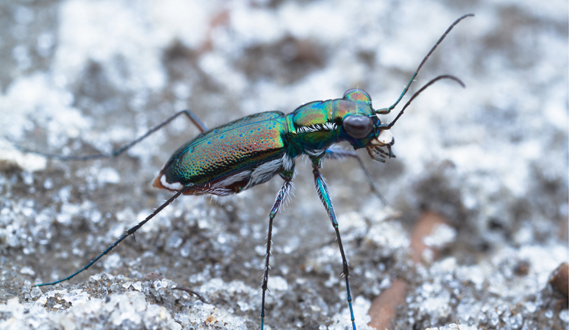 The Miami tiger beetle — a diminutive, iridescent native of Florida — was first discovered and described in the 1930s. But after its discovery, it wasn't seen again for six decades, when it was found in 2007 in the Richmond Heights area of Miami, Florida.

These beetles are found only in small sandy pockets of pine rockland habitat in Miami-Dade County, Florida. Pine rocklands are characterized by limestone outcrops, Florida slash pine (as the sole canopy species), and a diverse understory of scrubs and herbs. The Miami tiger beetle can be found in this habitat from early May through mid-October, suggesting that it either lives aboveground continually or has two emergence periods.

To provide greater protection to this rare Florida ecosystem and stave off looming extinction for the unique beetle, in 2014 the Center petitioned the U.S. Fish and Wildlife Service to list the Miami tiger beetle as threatened or endangered under the federal Endangered Species Act; the next year we petitioned Florida to list this unique insect under the state's own Act. The Service listed the beetle as endangered in 2016 and finally, in 2021, proposed to designate critical habitat.