A cactus ferruginous pygmy owl can fit in your hand. 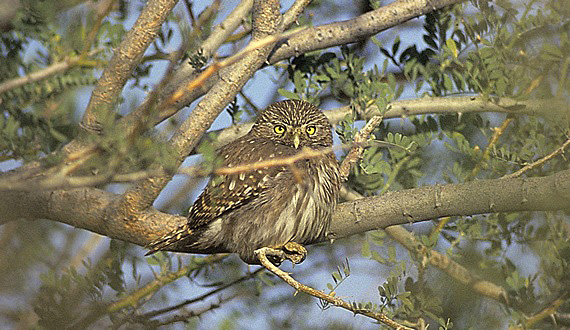 Cactus ferruginous pygmy owls are named for the saguaro cactuses they live in, their rusty-colored stripes, and their small size.

They’re as fierce as they are small: These 2.5-ounce raptors prey on birds twice their size and feed lizards to their chicks. Sadly they’re no match for urban development gobbling up their unique Sonoran Desert habitat in the U.S. Southwest.

The Center first petitioned to protect the owls in 1992, and following three successful lawsuits secured an endangered listing in 1997. We won the owl 732,000 acres of critical habitat in 1999. But developers fought back in 2001, with the tacit support of the Bush administration, and their lawsuit seeking to remove the pygmy owl’s’ endangered status overturned the bird's listing in 2006. The argument was that pygmy owls exist in Mexico and thus could be allowed to go extinct in the United States (though the Service's own biologists opposed the owl's delisting).

In 2007 the Center filed a new petition to list the owls — in southern Arizona, throughout the Sonoran Desert, or throughout their range, which includes portions of Arizona and Texas, as well as several states in Mexico.

After more litigation by the Center, in 2011 the Fish and Wildlife Service found that pygmy owls in the Sonoran Desert weren’t a “listable entity,” and that they weren’t otherwise endangered in all or a “significant portion of” their range.

The Center again sued in 2014, arguing that the agency’s denial of protection — as well as a policy governing when species that are in trouble in significant portions of their range qualify for protection — violated the law.

The Center was successful in both arguments. Finally the little owls won a new chance at protection in December 2021, when the Fish and Wildlife Service proposed to protect them as threatened throughout their range.

Check out our press releases to learn more about the Center's actions for cactus ferruginous pygmy owls.