Adult sage grouse have dark-green toes, which grow a yellow fringe during the winter to aid in walking on snow. 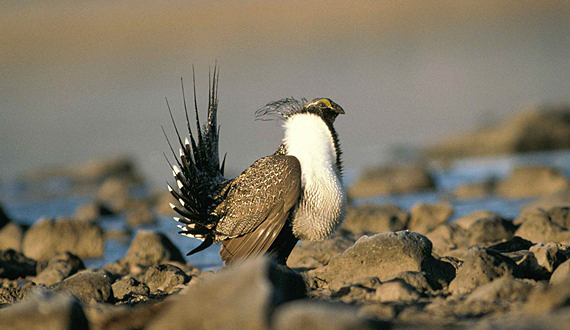 Every spring, male sage grouse gather to strut their stuff in riveting mating rituals. Punctuating their displays with swishing, hooting and popping sounds, males bob their heads, fan their tail feathers, raise their wings, and expand and contract distinctive yellow air sacs to compete for females' favor. But sage grouse “leks,” or mating grounds, are becoming less and less lively as habitat dwindles and numbers decline. Due to livestock grazing, development, off-road vehicles and many other threats, greater sage grouse are disappearing from regions across the West.

The Center first petitioned to protect bi-state sage grouse under the Endangered Species Act as a distinct population in 2005. After we and our allies filed suit, the Service finally agreed to consider protecting the birds in 2008, two years later declaring that protection, it was “precluded” due to insufficient resources — so the Center filed a notice of intent to sue.

In 2011 the Center reached a landmark agreement compelling the Fish and Wildlife Service to move forward on protecting the bi-state sage grouse population, as well as the greater sage grouse as a whole and more than 750 other species. As a result, in 2013 the Service proposed protecting bi-state sage grouse, along with 1,868,017 acres of critical habitat — but completely reversed course in 2015, deciding they "did not warrant" protection. After we sued again, prompting a judge to make the agency re-evaluate its decision, the Service again proposed protection — only to withdraw the proposal in 2020. We sued again the same year, and we won’t give up on making sure this important population gets the safeguards it needs to survive.

Learn more about the Center's actions for bi-state sage grouse.

The greater sage grouse as a species hasn't had it much easier. The Fish and Wildlife Service declared its Endangered Species Act protection “warranted but precluded” in 2010, putting the bird on a waiting list with no real safeguards and no protection in sight. In 2015 the situation even got worse when the Service denied protection altogether, taking it off the “candidate list.” And in 2017 the Trump administration announced plans for a “review” threatening to undermine efforts to protect greater sage grouse across 11 western states, giving big oil companies and other polluters potential new access to vital grouse habitat. So as we help keep up the fight for federal protection, we’re also defending greater sage grouse from Big Oil and other individual threats.

Learn more about the Center's actions for greater sage grouse.