The spotted owl is also known as the canyon owl, the brown-eyed owl, the wood owl and the hoot owl. 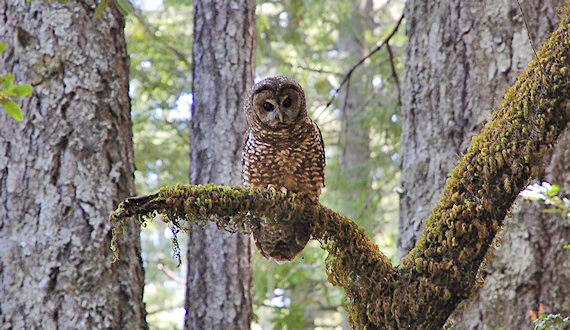 Like its cousins the Mexican and northern spotted owls, the California spotted owl is a bellwether of old-growth forests. This owl's classic four-note call was once commonly heard throughout the big trees of the Sierra Nevada and Southern California ranges, but logging, sprawl, and invasion by the barred owl — an aggressive relative increasingly muscling spotted owls out of the woods from British Columbia to the Sierra — are silencing it.

In the last half of the Clinton administration, the Forest Service initiated planning for the eight national forests of the Sierra Nevada under the so-called “Sierra Nevada Framework,” just as the Center and Sierra Forest Legacy filed petitions to protect the California spotted owl and Pacific fisher under the Endangered Species Act. The administration subsequently issued the Framework, which set forth protections for the owl and fisher and followed some of the guidelines recommended in the petitions. But claiming the Framework offered safeguards enough, the U.S. Fish and Wildlife Service denied protection for the owl under the Endangered Species Act. Then the Bush administration handily gutted the Framework's protections for both the fisher and the owl.

Two decades after our first petition to protect the California spotted owl under the Endangered Species Act, in August 2010 the Center and allies filed a lawsuit against the U.S. Fish and Wildlife Service for its repeated refusal to grant federal safeguards despite its own science.

Conservationists' fight to protect these owls had continued throughout those 20 years, including with a second federal petition by the Center and allies in 2004 (denied in 2006). After yet another petition by Wild Nature Institute and John Muir Project of Earth Island Institute, in 2015 the Fish and Wildlife Service finally issued an initial positive decision on protecting the owls.

Since the agency dragged its feet, the Center sued in 2016, that year reaching a settlement requiring the Service's listing requiring by 2019. The Center and allies had to launch another lawsuit in spring 2020 after the Trump administration denied listing, even though the Service had just declared that the spotted owl population was still declining and likely to be wiped out from large portions of its range due to logging, large fires driven by climate change, and the invasive barred owl. Even if our 2020 doesn't succeed, we won't abandon t hese owls.

We've also worked to save the California spotted owl's habitat. We've helped stop a number of timber sales in the Sierra Nevada and have advocated for strong owl protection in plans developed for the Giant Sequoia National Monument and four Southern California national forests. The Center has also joined Sierra Forest Legacy in challenging the weakened version of the Sierra Nevada Framework. In 2014 the Center filed a lawsuit against the U.S. Forest Service over its continued failure to protect post-fire wildlife habitat from outdated and destructive logging practices. The areas at issue provide crucial habitat for wildlife for the Californa spotted owl and other species.

Check out our press releases to learn more about the Center's actions to save Joshua trees.