Few animals evoke the wild like wolves. Majestic, intelligent and highly social, they’re crucial in driving evolution and balancing ecosystems. Some 2 million wolves once roamed freely throughout North America. But federal extermination programs slashed their numbers to the breaking point.

By the 1960s gray wolves were finally protected under what would become the Endangered Species Act. They'd been exterminated from all the contiguous United States except Michigan’s Isle Royale National Park and part of Minnesota. 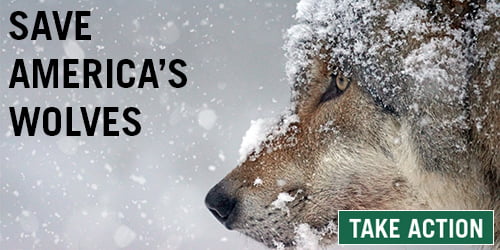 Please take a moment to tell governors with wolves in their states to do everything in their power to ensure the species' survival and recovery.

A COMEBACK ... BUT A LONG ROAD TO RECOVERY

After receiving federal protection, gray wolves saw tremendous recovery in the western Great Lakes region. Their populations grew and spread through Wisconsin and Michigan. Through natural migration from Canada and reintroduction to Yellowstone National Park and central Idaho, wolves returned to the northern Rockies and are establishing a toehold in the West Coast states. Recovering populations exist in Idaho, Montana, Wyoming, Washington and Oregon, with a few wolves beginning to range into California.

To a lesser degree, Mexican gray wolves in the U.S. Southwest have also seen some recovery. Between 1977 and 1980, the last few surviving Mexican wolves were captured and bred, and their progeny were reintroduced into Arizona and New Mexico. Now, although this gray wolf subspecies continues to struggle in the United States and Mexico, at least it has a hope of recovering in the wild.

Despite these substantial gains amid extreme challenges, the job of wolf recovery is far from over. Wolves need connected populations for genetic sustainability, and natural ecosystems need wolves to maintain a healthy balance of species. Yet today wolves occupy less than 10% of their historic range and continue to face persecution. The Center works to defend wolves across the country through science, the law and creative media — and with our supporters’ help.

OUR WORK TO SAVE WOLVES NATIONWIDE

Since the U.S. Fish and Wildlife Service first tried to strip wolves’ federal Endangered Species Act protections in 2003, the Center has been in court fighting that action tooth and nail. Over the past two decades, we’ve filed a long list of lawsuits to retain protections, which have helped wolf populations grow.

Even with our successful lawsuits, wolves have remained under attack in Congress, where anti-wolf legislators have continuously tried to undo court rulings by attaching delisting riders to major federal budget bills. For nearly two decades — with the help of Center supporters calling and emailing their members of Congress — we held off these efforts to permanently end Endangered Species Act protections for gray wolves in Wyoming and the western Great Lakes states.

When the Trump administration proposed to remove protections from nearly every gray wolf in the lower 48 states, in 2019 we launched our Call of the Wild campaign, holding rallies and community hearings across the country. Our campaign, joined with efforts by our allies, generated 1.8 million comments opposing the plan.

Despite the Center’s legal wins and massive public support for gray wolves, in fall 2020 the Service finalized its decision to strip federal protection from all U.S. wolves except the small Southwest population (listed separately under the Act). This wolf “delisting” rule goes into effect in early January 2021, but the Center and allies have already filed a notice of intent to sue. Our notice states that removing protections is unlawful because wolves haven’t recovered. The decision also contradicts current science on wolf conservation and taxonomy and ignores concerns raised in peer reviews by the nation’s top wolf scientists.

We’ll keep fighting to make sure wolves regain the protection they need and repopulate suitable habitat across the continent.

SAVING WOLVES WHERE THEY LIVE

The Center has been campaigning for gray wolves since our inception. While promoting the need to protect, reestablish and recover wolves in all suitable habitat in the lower 48, we also work regionally to fight the specific threats wolves face in the states where they still survive.

Our legal work led to the 1998 reintroduction of Mexican gray wolves into the Apache and Gila national forests. The Center — founded in the Gila in 1989 and with staff in the reintroduction area to this day — monitors wolf and habitat management. We’ve vigorously challenged federal shooting and trapping of Mexican wolves and are pushing for the resumption of wolf releases from captivity to the wild. We’ve petitioned and sued for changes in Mexican wolf management, development of a new, science-based Mexican wolf recovery plan, and listing of the Mexican wolf as an endangered subspecies. We help organize public pressure on agencies and elected officials to provide maximum protection for these beleaguered animals.

In the northern Rocky Mountains, the Center was part of several successful lawsuits that delayed the removal of federal protections for wolves from April 2003, when first promulgated by the Bush administration, until May 2011, when protections were finally (though still prematurely) removed through an infamous congressional rider. Our legal efforts helped to allow the wolf population to grow by 1,000 animals during those eight years, from 761 to 1,774. Now that management has been turned over to state wildlife managers, we fight to protect wolves from trophy hunting and other exploitation.

The Center and allies joined forces in Colorado to get a wolf-reintroduction initiative on the ballot, and voters passed the measure in the 2020 election. Colorado’s state wildlife agency will now develop a wolf restoration and management plan and start wolf reintroductions in parts of the state by the end of 2023.

The Center and allies are fighting for maximum protection of the growing but still vulnerable population of wolves in the West Coast states of Washington, Oregon and California. In Oregon and Washington, we’re pushing state wildlife-management agencies to protect the recovering populations and use nonlethal methods to address any conflicts with livestock. In California our petition led to wolves’ protection under the state Endangered Species Act — so it’s illegal to harm, harass or kill any wolf within California state lines for any reason other than in defense of human life.

Our multiple lawsuits against the feds’ efforts to prematurely strip gray wolves’ protections have been of particular help to wolves in the Great Lakes region, allowing their continued population growth. Besides being especially vulnerable to disease, vehicle collisions, and illegal shootings, these wolves are threatened by potential resumption of state-sanctioned hunts. We’ve kept pressure on state wildlife-management agencies set on killing wolves, including by challenging Minnesota's first-ever regulated wolf-hunting season.

The Center cofunded efforts by the Maine Wolf Coalition to collect and DNA-test scat in the region, to search for wolf presence. In 2020 these efforts paid off, with DNA-test results showing at least one wild wolf roaming across Maine. The potential for wolves to return to the Northeast is one more reason federal protection should not be stripped from these animals.

WOLVES ARE CRUCIAL FOR BIODIVERSITY

Since wolf recovery plans were first written in the 1980s, people have learned much more about wolves’ behavior, ecology and needs. We know, for example, that returning wolves to ecosystems sets off a chain of events that benefits many species, including songbirds and beavers that gain from a return of streamside vegetation — which thrives in the absence of browsing elk that must move more often to avoid wolves — and pronghorn and foxes aided by wolves' control of coyote populations.

A mere 6,000 wolves occupy less than 10% of their historic range in the lower 48 states. Establishing wolf populations in remaining suitable habitat in the Northeast, southern Rocky Mountains, Southwest, Pacific Northwest, California and elsewhere would secure a future for wolves and allow them to play their valuable ecological role in more of their former home territory. The Center fights to stop wolf persecution and link isolated populations together, for the sake of wolves themselves as well as for ecosystem rejuvenation on a broader scale.

Your support is crucial to our fight to save wolves and other species.

Stop the assault on the Endangered Species Act.

Don't sit on the sidelines.

Give Now »
Close this window.